Suicide has risen to be one of most serious public health problems globally. 703000 people die by suicide annually; that is a life lost every 4 seconds. For each successful death by suicide, more than 20 attempts are recorded. In 2019, it was the fourth leading cause of death globally among the age range of 15-29 year-olds. This withstanding, the low and mid income countries tend to bear the bigger brunt with over 77% of suicides recorded.

The complexities that surround suicide, however, make it difficult to have proper data on this which then means that there is a possibility that the numbers could be higher than this.

“Like a pebble in a pond, the waves of suicide ripple outwards,” were the words used to describe the impact of suicide by Ken Norton, director of NAMI, New Hampshire. The truths in this words cannot be measured because the waves generated by suicide far outstretch the individual to adversely affect family, friends, medics and the larger community starting with religious communities. Mixed reactions plague those touched by the waves.

In the first wave which incorporates family and friends common reactions swing between blaming oneself or others and toxic survivors’ guilt.

“You drove your husband to suicide.”

“It was my fault my son killed himself. I must be a horrible mother and that is why this is happening to me.”

The grief associated with suicide makes it very difficult for loved ones to process and may cause them to develop complicated grief. When the cause of death is an illness everyone knows why the person died but with suicide you are left with many questions. How? Why? When overwhelmed by feelings of blame either externally or internally, one can easily develop self-hate and isolate themselves. This is further cofounded by the stigma associated with suicide wherein the empathy, compassion and support normally offered to their loved ones during the grieving process, is replaced by rejection, shame and at times ridicule. This inevitably forces the loved ones to silence-worsening the situation.

With the isolation, the relatives become prone to rumination. (The process of continuously thinking about the same thoughts, which tend to be sad or dark)The rumination also comes with intense feelings of abandonment, betrayal, anger and blame towards the deceased.

“He was so selfish. How could he do this to us?”

In a survey by Dr. Sharon McDonnell at the University of Manchester, it was found that over 30% of those who lose loved ones to suicide think of taking their own lives. This risk is graver among children who have lost parents to suicide or a parent who has lost a young child.

When the loved one struggled with mental health, the guilt of how much more they could do to prevent this becomes so overbearing. The family bereaved may also feel a sense of betrayal and blame towards the medical fraternity for not doing enough to save their loved one.

The process of successful mourning and grieving enables the persons to come to terms and find meaning in the loss thereby connecting with their loved one. However, due to the social beliefs around suicide, this is not facilitated across communities. In some communities, when someone dies by suicide, it is a taboo, they are buried differently and future generations cannot be named after them. This tends to affect the communal process of mourning and further alienate the bereaved. Most religious communities look at suicide as a sin as such the person is condemned both in the community and set to be punished in the afterlife. This also interferes with the grieving process.

Taking everything into consideration, it is important for us, as a country, to have more candid conversations on mental health and suicide and to put more efforts in the journey that has already begun in decriminalizing suicide.

This way, we journey on towards a country that offers safe spaces for its citizens to reach out more and speak out more when they are going through a rough patch. This, will in turn, mitigate the alarming rise is suicide cases and eventually safeguarding citizens’ wellbeing.

If you are or are aware of anyone going through a rough patch in life, Chiromo Hospital Group is here for you, to listen, help and walk you to being a better version of yourself and eventually to Recover in Dignity.

SEND US A MESSAGE ON OUR SOCIAL MEDIA PAGES @ChiromoHospGrp. 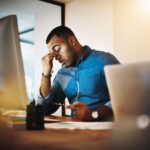 How to Overcome Fear of Failure?