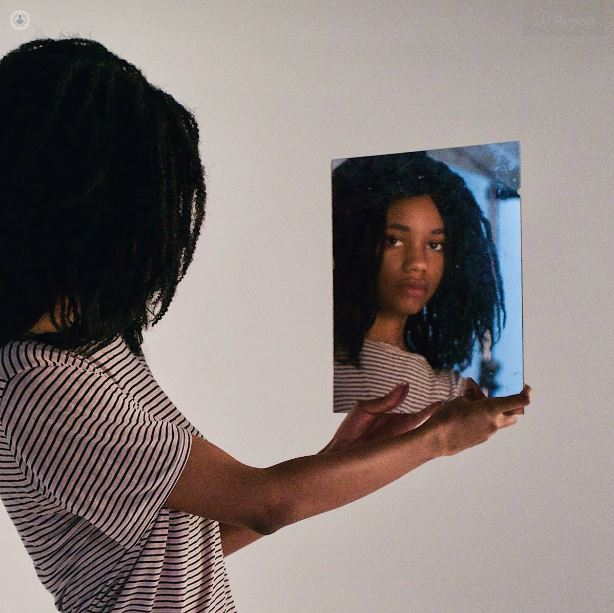 If someone today pointed out that you have a white or blackhead you are likely to go to a mirror to check where it is and you might be tempted to pop it. Living in our current society, being pretty, handsome, good-looking, being of ideal weight, having curves or having a model body, being short or having the so-called ‘American height’, being black or light skin is the conversation.  People may feel uncomfortable in their own skin or body. May be insecure about how they look and struggle with thinking about what to wear to fit our body type or to hide what we perceive as ‘defects’. But, at what point does body dissatisfaction become a clinical problem and need clinical intervention?

Body Dysmorphic Disorder is a condition in which people think there is something wrong with their body and become obsessed with this perceived body defect. The flaw may be minimal or barely there but people struggling with BDD believe the flaw is conspicuous and it makes them unattractive and ugly.  They become overly focused on details of the external stimuli. It is mainly been characterized by:

The preoccupation with perceived physical flaws persists at an average of 3 to 8 hours per day and is often intrusive and are correlated with anxiety and distress. The compulsive behaviors are repetitive, time-consuming, and are hard to control and resist. These irresistible urges of body obsessions are often associated with low self-esteem, feelings of shame, depressive symptoms, anxiety, and guilt.

BDD affects 1.7% to 2.9% of the general population, translating to about 1 in 50 people struggling with BDD. These numbers indicate that BDD is as common as Obsessive Personality Disorder and more common than anorexia, bulimia, and schizophrenia. BDD affects all people of all gender identities and races.

BDD can often co-occur with depression, anxiety disorders, obsessive-compulsive disorders, and substance use disorder. People struggling with BDD may use substances to numb their feelings, self-medicate to cope with the negative feelings. Many people with severe BDD are unable to take part in day-to-day activities e.g., going to work, be in or attend school, create and maintain relationships. The feelings of shame and guilt can contribute to high rates of suicide ideations due to emotional and interpersonal turmoil.

Neuroimaging studies have proven that people with BDD have implicated abnormal structure and functioning of occipitotemporal and front limbic regions. They may also have impaired visual information processing. Visual contrast sensitivity through the eyes of the world may appear dull. People with BDD have been proven to have reduced striatal dopamine, a hormone responsible for how we feel pleasure.

The development of BDD is associated with past experiences of abuse, violence, and trauma. BDD is also significantly correlated with symptoms of PTSD, depression, ADHD, generalized anxiety, and social anxiety disorders. Compared to healthy control, people with BDD misinterpret neutral emotional expressions as taunting, angry and personalized.

BDD is treated through the use of medication such as selective serotonin reuptake inhibitors (SSRIs). Cognitive Behavioral Therapy is also used to help individuals challenge their thinking patterns. Exposure with response prevention techniques may be used e.g., applying excessive make-up, focusing attention internally with a goal of achieving anxiety habituation. One can also be psychoeducated on the disorder, motivational enhancement, and attention training. Exploring the course and initial triggers, explore current triggers; what things increase your anxiety, your compulsive behavior. It is also important to explore strengths and resources and encouraging one to practice self-care.